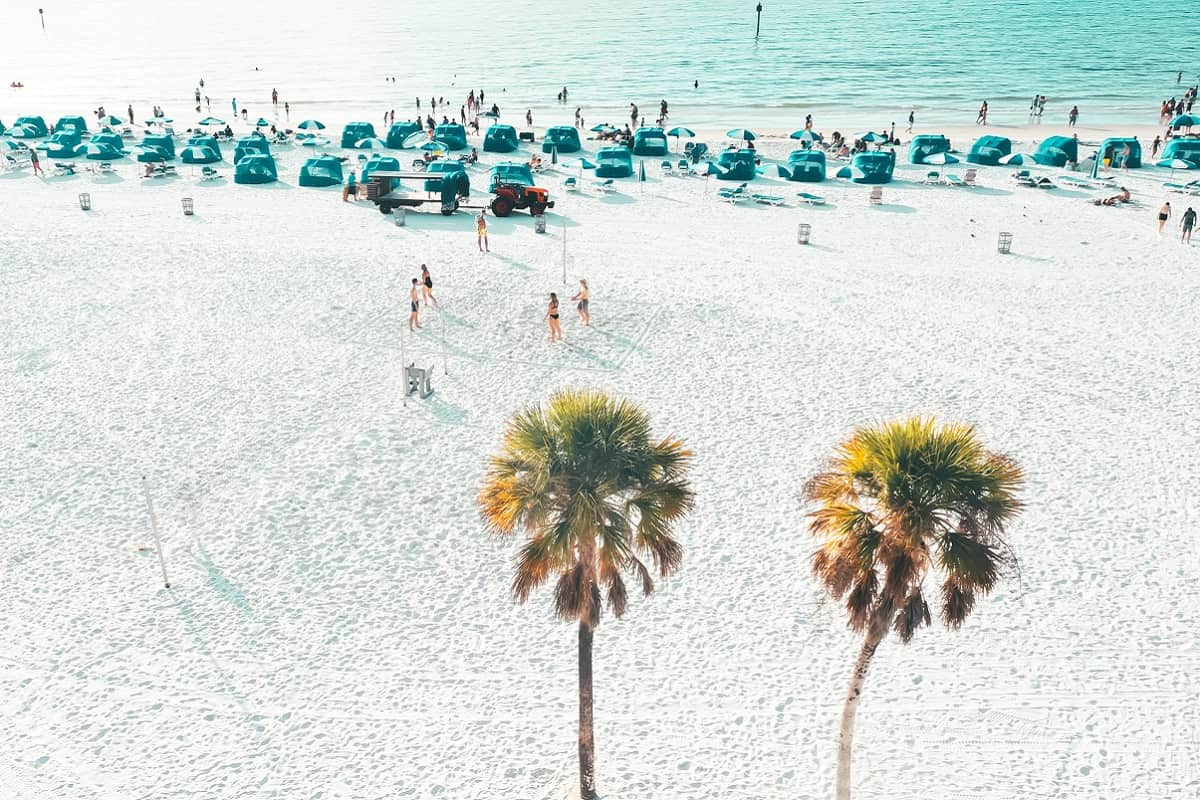 Clearwater Beach is located on a barrier island on the Gulf Coast of Florida. The main attraction here is the white and sandy beach that stretches for about 2.5 miles (4 km) on the coast.

The beach consistently gets reviews as one of the best beaches in both Florida and America.

And Clearwater Beach is just about 2 hours away from Disney World in Orlando, which makes the two a great pair to combine for a dream vacation.

Why Clearwater Beach is so popular

First of all, Clearwater Beach has that super-fine and sugar-white sand that you wish your local beach had. And the beach is very well maintained, which further adds to the picturesque look.

And secondly the water is generally calmer here than on the Atlantic side of the state. As it’s more protected the waves simply tend to be smaller.

If you visit Clearwater Beach you’ll also notice that you have plenty of restaurants, cafés and bars right at the beach. Here you don’t need to move around a lot if you don’t want to.

And what could be better for a beach escape than white sand, calm waters and great convenience?

The best sunset spot in town

Pier 60 on Clearwater Beach is a fun place to go to at any time of the day. But it peaks the last hours of the day. Then it’s not as hot as in the middle of the day which makes it a more comfortable walk. And it gets increadibly beautiful as the sun starts to set on the western horizon.

Spot the exotic local animals during your escape to Clearwater Beach

Loggerhead turtles nest and hatch along the beaches of western Florida from May through October. That means that the area around Clearwater Beach is prime real estate for turtles. And it also means that visitors need to be careful to not disturb the nesting and hatching turtles.

But if you’re lucky during your escape to Clearwater Beach you could encounter turtles and dolphins in the wild. To improve your chances a fun thing to do when visiting is to take a dolphin tour on the water.

If you want a break from the sometimes busy Clearwater Beach and go to somewhere more remote, but still close by, a trip north to Caladesi Island is a great option when visiting Clearwater Beach.

A pro with the Gulf Coast of Florida is that a beautiful beach never is far away. And just a stone’s throw away from Clearwater Beach in the southern direction you find another stunning white beach in Sand Key Park.

Sand Key Park is less than 10 minutes away from Clearwater Beach and a great option with easy accessibility for the days you want to beat the crowds. At Sand Key Park you can feel closer to nature and enjoy the peacefulness as the pelicans swing by.

Here you find the answers to some frequently asked questions about visiting Clearwater Beach.

Is Clearwater Beach a good place to vacation?

Clearwater Beach has been named the best beach in the United States numerous times. Here you find sugar-white sand, a good variation of restaurants and activities for all ages to participate in.

Can you swim in Clearwater Beach in the winter?

Generally the water temperature in Clearwater Beach drops to the upper 60°F (20°C) region in December. From then the temperature drops further to the middle 60°F (18°C) range until spring when it starts to heat up again.

How far is it from Clearwater Beach to Disney World?

From Clearwater Beach to Disney World in Orlando it’s 92 miles (148 km) and around 2 hours by car.

Where to stay in Clearwater Beach >>

Amazing places to visit in Orlando >>

The great Florida road trip from Orlando to Key West >>

The perfect itinerary for a Fort Myers Beach vacation, Florida

Where to see alligators in Florida

Where to stay in Clearwater Beach, Florida