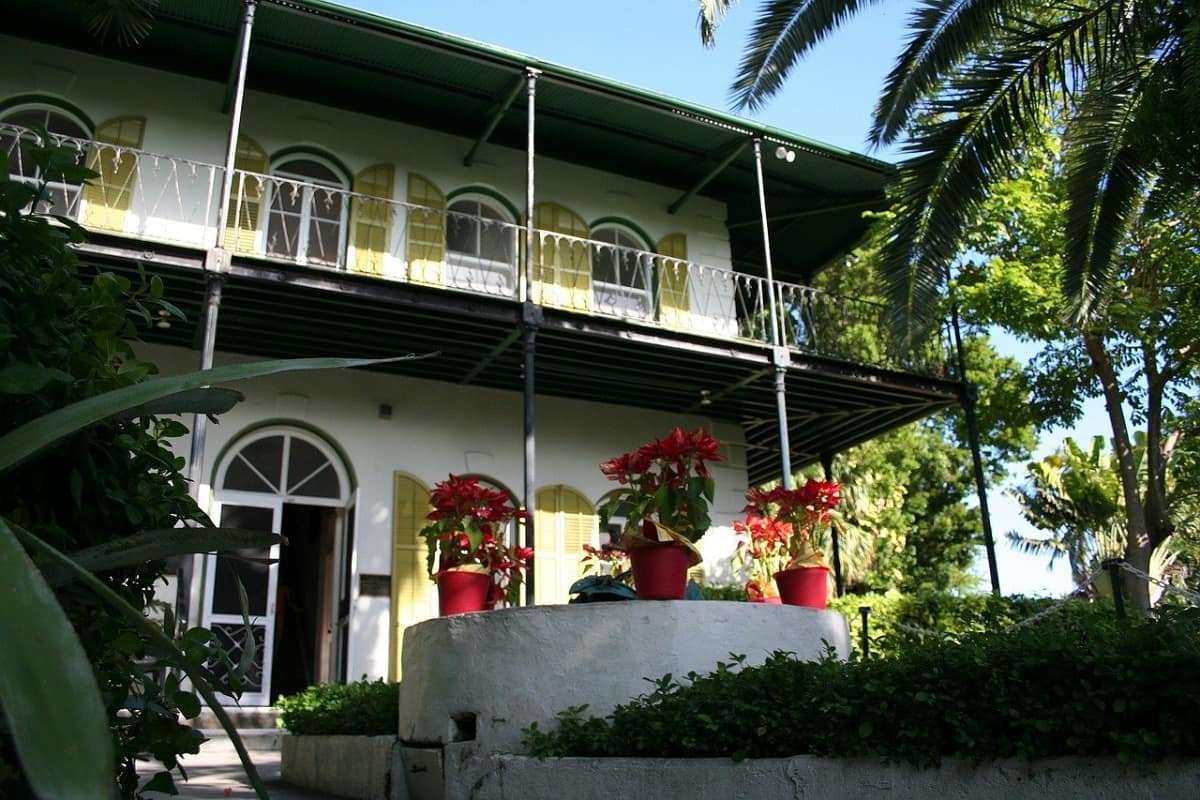 Ernest Hemingway lived in Key West in the 1930s and he wrote many books while he did so. In fact, his time in Key West was one of the most prolific periods of his writing career. And the beautiful Ernest Hemingway Key West Home & Museum is open for visitors to come and see how he lived.

The house in Key West was a gift to Ernest Hemingway and his wife Pauline, from the latter’s well off uncle. Originally, the Key West house was built from rock and in Spanish Colonial style in 1851. But in 1931 when the Hemingways received it, the house was in massive need of restoration. So they made an overhaul to get the Key West home to the state and National Historic Landmark it is today.

One of the most extinctive features on the Ernest Hemingway Key West home is the pool which was built in 1937-1938, for an at the time extreme amount of $20,000. It was the first pool in Key West and it was installed by Pauline while Ernest was overseas. When Ernest was back home and realized how costly it was, he threw a penny on the ground and declared that: “You might as well take my last cent”.

Ernest Hemingway lived in the house in Key West from 1931 to 1939. During Hemingway’s Key West years he wrote some top novels and poems.

From the Key West house famous Hemingway works written for example are The Green Hills of Africa, The Snows of Kilimanjaro, Death in The Afternoon and to Have and Have Not.

See the property with a guided tour

The Ernest Hemingway Key West house and its garden are extremely well kept and the general admission fee includes a 30-minute guided tour.

The guide tells you about all the stages of Hemingway’s life as the house is shown, from the beginning to the end. And the story about Hemingway is both informative and entertaining.

He lived an exciting life, and the guides do a great job telling the story. Of course with the extra spice of some of the famous Ernest Hemingway quotes.

A fun touch to a visit of the grounds is that approximately 40-50 six-toed cats live there. The Ernest Hemingway Key West cats are descendants of the cat Snow White that Hemingway once was given by a ship captain.

And the cats are not shy at all, you will find the Hemingway cats all over the place. So you will have plenty of chances to make their acquaintance.

For Ernest Hemingway fans and most others

The tour includes information about all aspects of Hemingway’s interesting life. But you surely don’t have to be a fan of Hemingway to find a visit to Ernest Hemingway Home and Museum inspirational.

Hemingway’s life is colorfully shared by the guides. And it also is entertainingly explained how life was in Florida and Key West in the 1930s. Like Hemingway himself said: “Every man’s life, told truly, is a novel”. And the story when you go to the Ernest Hemingway Key West home is really told truly. Don’t miss it when you visit Key West.

Location of the Hemingway Home and Museum

The Key West Lighthouse that was built long before Hemingway entered the scene is located just across the road from the old home.

Other things to do in Key West

Key West is a place full of things to do. Other fun things to discover apart from the Hemingway Home are Mallory Square, Fort Zachary Taylor State Park, Southernmost Point, Sloppy Joe’s and Mile Marker 0.

Here you find the answers to some frequently asked questions about visiting the Hemingway Home & Museum.

Where can you visit the former home of Ernest Hemingway?

The former home of Ernest Hemingway is located at 907 Whitehead Street on the island of Key West in Florida.

Why are there so many cats at the Hemingway House in Key West?

Ernest Hemingway got a white six-toed cat named Snow White as a gift by a ship captain. Some of the cats that live on the ground today are descendants of the original cat.

What are the cats with extra toes called?

The cats with extra toes that you find at the Hemingway Home in Key West are called polydactyl cats. Sometimes they are also called “Hemingway cats”.

Is it worth driving from Miami to Key West?

There are a lot of fun things to see and do on the way from Miami to Key West. Key Largo, Islamorada, Marathon and the Lower Keys are all great stops before reaching before Key West

Continue reading: The ultimate drive from Miami to Key West >>

This site uses Akismet to reduce spam. Learn how your comment data is processed.

Where to stay in Orlando

The best things to do in Islamorada, Florida

The perfect itinerary for a Fort Myers Beach vacation, Florida

The best things to do on Sanibel Island, Florida

December 7, 2020
Close Panel
We use cookies to ensure the best experience on our website. If you continue to use this site you agree to our terms and conditions.AcceptRead more