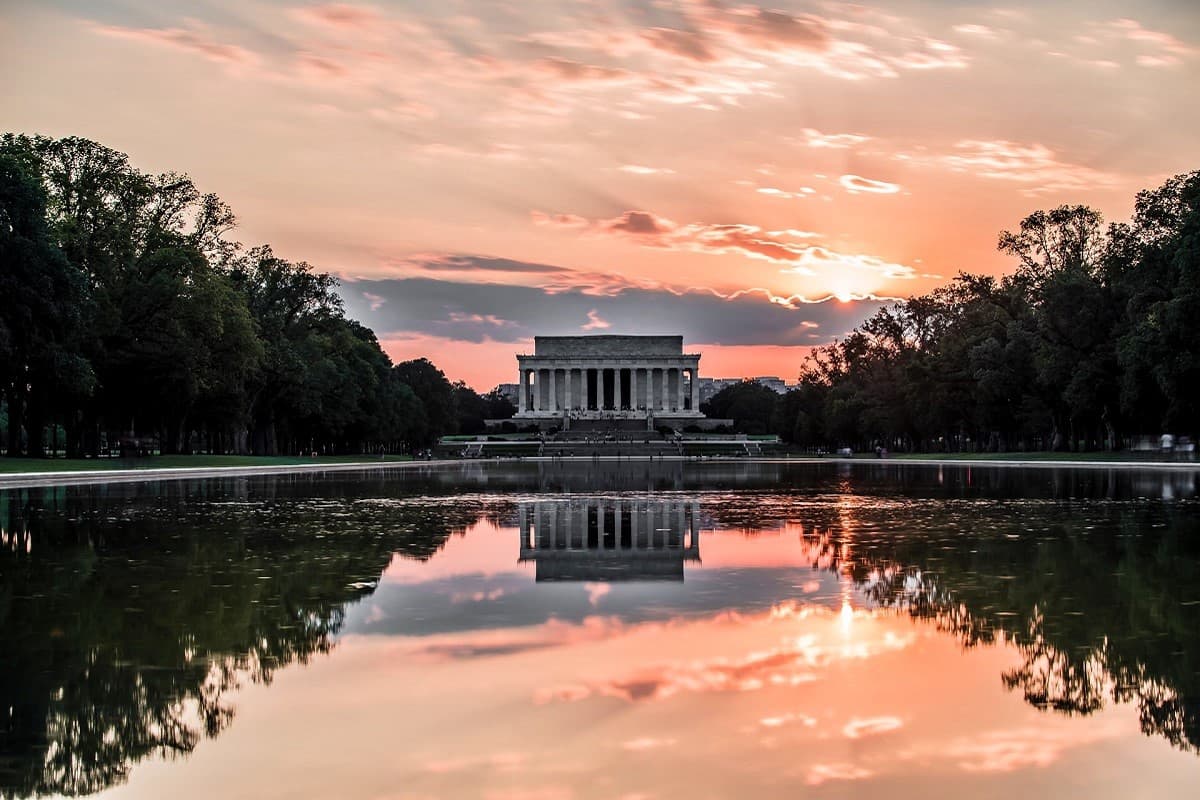 How to make the most out of an evening if you are in the capital of America and have spent the day in crowds while seeing some of the many sights the city has to offer? Take a central walk in Washington and experience the sights one more time, when other visitors have called it a day!

The benefit of taking a walk in Washington after sunset

The capital of the US has gotten its name after George Washington, the first president of the United States. The city that has a lot to offer is closely associated with impressive architecture.

The White House, Thomas Jefferson Memorial and the United States Capitol among other are all beautiful in daylight. But at night they are lighted up and that makes the white facades and structures look even more distinguishable.

So by visiting the historic area of Washington later in the day you get to see the buildings in a different context. And to that you can also add the benefit of smaller or even inexistent crowds.

The route of the late night walk in Washington

The National Mall is a landscaped park in the central part of Washington D.C, which is full of monuments celebrating heroes from the past. The area stretch from Lincoln Memorial in the west to the United States Capitol in the east. And north to south from the White House to Thomas Jefferson Memorial.

To walk from west to east takes about 50 minutes and from north to south about 30 minutes. This doesn’t include any stops you make on the way.

The route we decided on took us to the famous landmarks in the following order:

The White House, Washington Monument, Lincoln Memorial, Thomas Jefferson Memorial, Capitol Building and then back to the White House again. This walk took us two and a half hours to carry out but the route can of course be adjusted in accordance with personal preferences.

Interesting monuments along the walking route

There are so many beautiful monuments and memorials in the National Mall in Washington. The main points of our route are the White House, Washington Monument, Lincoln Memorial, Thomas Jefferson Memorial and Capitol Building.

But it needs to be pointed out that National Mall offers so much more between these main attraction points. With that said, let’s check out the main points of the walking route.

The White House has been called home by presidents for more than 200 years. Since John Adams in 1800, every US president has used it as residence. From the north side you can get close enough to really appreciate it. Is the president at home today, do you believe?

On the way you also pass the Washington Monument. The high rising obelisk that by far is D.C´s tallest monument.

In the western end of the Mall you find Lincoln Memorial. Be extra observant for the symbolism. For example, the 36 columns represent the states in the union at the time of Lincoln’s death.

The temple like memorial Thomas Jefferson Memorial was built to honor and remember the third president of the US.

The Capitol Building marks the most eastern point of our evening walk in Washington. If you started the walk when the sun was about to set it will be dark when you reach Capitol Building. But that doesn’t make it look less pretty. Taste is subjective, but don´t you agree that it looks spectacular?

Back at the White House you almost feel overwhelmed over all the beauty that the National Mall has to offer.

You get closer to the White House from the north side than from the south side. But of course even the president needs some privacy!

We went for the walk at night time with the White House as starting and endpoint. Very few people did the same, which meant that we had all space you could ask for when taking a relaxing late night walk.

The walk was made in two and a half hour. However, surely you could spend more time to try to fully take in and appreciate walking down on History Lane in Washington D.C.

The absence of crowds in fact enabled us to appreciate the stunning buildings even more than we did earlier in the day in daylight.

The legendary road trip from New York to Miami >

Tags: Things to do

A Route 66 stop in Albuquerque, NM

Why you should make a stop at New River Gorge Bridge, WV

June 2, 2021
We use cookies to ensure the best experience on our website. If you continue to use this site you agree to our terms and conditions.AcceptRead more