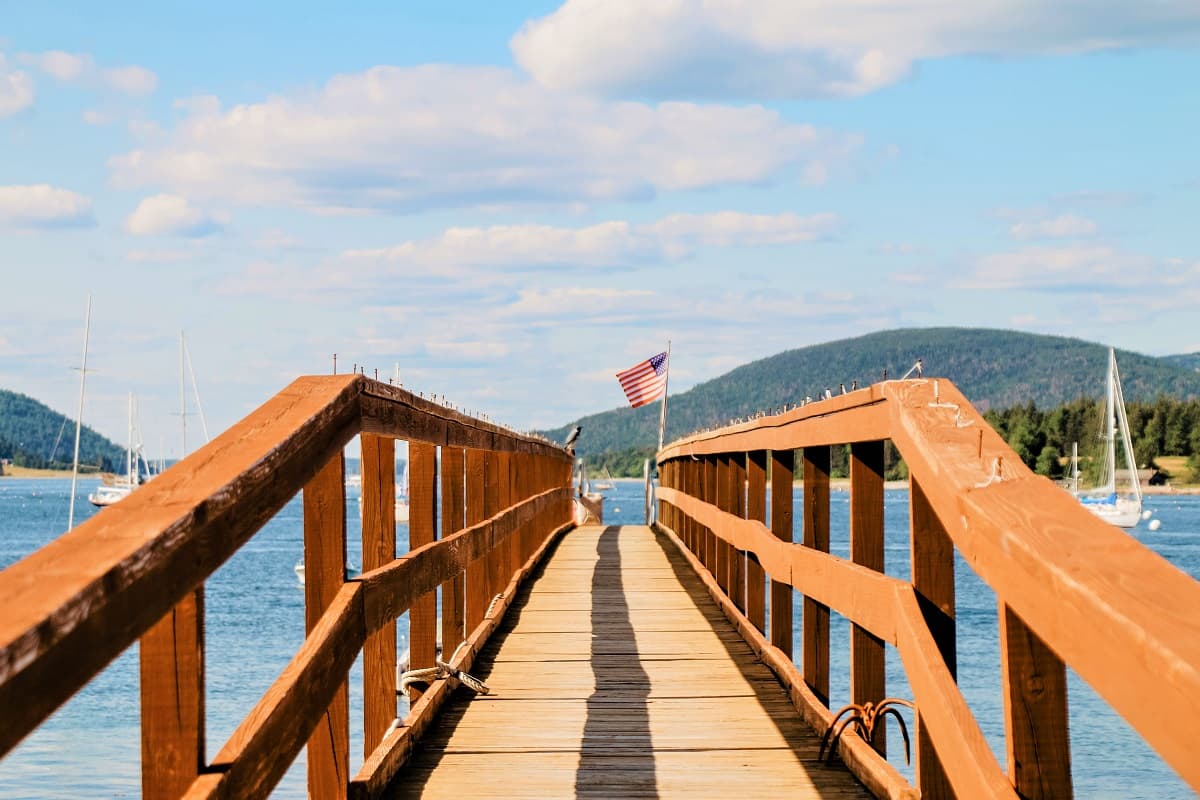 The ultimate road trip from New York to Maine magnificently traces the New England coastline. It’s a spectacular journey with cute seaside towns, dutiful lighthouses and jaw-dropping vistas. As you take the New York to Maine drive, there’s certainly a lot to write home about.

Highlights on the road trip from New York to Maine are listed below. For even more great NYC to Maine destinations you also find additional stops along the way.

The road trip from New York to Maine stunningly takes you up along New England’s coastline. But there’s also a never ending selection of iconic New York attractions to enjoy before you take off.

You sweet little oasis in the heart of New York City. Manhattan’s Central Park has since its first opening in 1858 provided a peaceful domain in the otherwise busy city.

In summer it’s a great spot to soak up the sun. In winter the park offers a unique venue for ice skating. Around the year Central Park is the perfect spot for a quiet stroll.

Take a photo from Brooklyn Bridge

Brooklyn Bridge famously spans East River between Manhattan and Brooklyn. The symbolic bridge, one of 21 that connect Manhattan with the rest of the city, invites visitors to a celebrated perspective.

From Brooklyn Bridge you not only get a close-up view of a fascinating construction. The bridge also gives you an unmatched view of New York City’s skyline.

The New York to Maine road trip is full of awe-inspiring photo opportunities. But when it comes to skylines, the New York City skyline is certainly a hard one to beat.

Additional stop: Mystic in Connecticut is a pleasant early addition to the New York to Maine road trip itinerary. In the town, which is located right on the way from New York City to Newport, you find a cozy waterfront area and the extensive Mystic Seaport Museum.

Newport’s signature mansions were built between the 1850s and early 1900s. The historic structures demonstrate a wide range of architectural styles.

Such progressive facades make you impressed. However, it’s when you go inside the Newport mansions that they really come to life.

On a guided mansion tour you indulge in colorful stories of previous times and owners. It’s an activity for the history buff or anyone who likes a good story.

So which Newport mansion tour should you include on the road trip from New York to Maine? In good company the Breakers, the Elms and Marble House are constantly ranked as top Newport mansions to visit.

A stone’s throw from the enchanting mansions you find Newport Cliff Walk. The salty pathway gorgeously extends for 3.5 miles (6 km) along Newport’s coastline.

With both Atlantic views and lovely homes to rest your eyes on the Newport Cliff Walk is a celebrated attraction. Some of the best things on the road trip from New York to Maine are free, and Newport’s cliff walk is one of them.

Your car could need some rest too. Several Newport places to stay give you walking distance to the city’s stunning cliff walk.

Cape Cod is a slight detour on the New York City to Maine road trip itinerary. Yet if you want to capture the most beautiful spots along New England’s coastline, the Cape is a must to include.

Cape Cod is blessed with mile after mile of unspoiled shoreline. The area of the peninsula that best showcases its untouchedness is Cape Cod National Seashore.

Cape Cod National Seashore is 43,607 acres big. Within the huge seashore you find everything from deer to turtles.

It’s a paradise for hikers, bikers and beachgoers alike. In summer its beaches peaks, but year round Cape Cod National Seashore makes up a superb New York to Maine road trip stop.

Catch the ferry to Martha’s Vineyard

Martha’s Vineyard is its own little peaceful bubble. Located off Cape Cod, just 35 minutes by ferry away, it’s an easy addition to the NYC to Maine itinerary.

The island is home to six Martha’s Vineyard towns to get to know. These are: Oak Bluffs, Edgartown, Vineyard Haven, West Tisbury, Chilmark and Aquinnah.

Oak Bluffs is famous for its colorful gingerbread cottages, while Edgartown radiates elegancy like no other place. Every town on the island offers that sought-after vacation ambience.

You can’t go wrong when you look for the best areas to stay in Cape Cod. But have in mind that it takes well over an hour to go from the beginning of Cape Cod to the Outer Cape.

On the way from New York to Maine the streets of Boston draw your attention. Massachusetts’ biggest city is just filled with history to explore.

Walk back in time on the Freedom Trail

In the heart of Boston the 2.5 miles (4 km) long Freedom Trail takes you back in time. The trail, which starts at Boston Common and ends at Bunker Hill Monument, shows you one historic monument after another.

Highlights as you walk the Freedom Trail on the road trip from New York to Maine include Massachusetts State House and Old State House. Another outstanding building to keep your eyes open for is the Old Corner Bookstore.

Boston’s Harvard University is one of the most reputable institutions of higher learning in the US. Its alumni includes former presidents and Nobel Prize winners.

So wouldn’t it be nice to enter the doors of Harvard on the New York to Maine road trip, if so only for a few hours?

On a guided Harvard University tour that’s exactly what you get to do.

Not only are the grounds interesting to see, but there are also many amusing tales to be told. You don’t have to be into history to appreciate a Harvard tour on the New York to Maine drive.

Boston’s heart offers direct access to the the Freedom Trail. Another option is Cambridge, where you find the legendary Harvard grounds.

Portland welcomes you to Maine in fine style. Maine is well known for its many lighthouses, and Portland certainly sets the lighthouse standard high.

No road trip from New York to Maine is complete without a stop at Portland Head Lighthouse. It’s the lighthouse that’s known as Maine’s most photographed such.

Positioned on majestic cliffs Portland Head Light is the definition of a photo opportunity.

Breathe in the Old Port

Overlooking the Fore River the Old Port in Portland is listed on the National Register of Historic Places. The area characterized by its cobblestone streets, brick buildings and fishing piers has a rich past as a leading Maine port.

Still you don’t need to spend any money in the Old Port to have a good time. Just walking around in the district, where history and contemporary features intersect, is as rewarding.

Stay in or near the Old Port to have the best of Portland close by. The location is both cozy and convenient.

Additional stop: Why not throw a legendary never-closing store into the mix of fun stops on the NYC to Maine road trip? The L.L. Bean Flagship store in Freeport is widely known for its large selection of products. But even if you’re not up for a shopping, its gigantic storefront boots make up a quirky stop.

A heartwarming town sandwiched in between the mountains and Penobscot Bay. Welcome to Camden on the road trip from New York to Maine.

Camden Hills functions as Camden’s soothing backdrop. As part of Camden Hills State Park the green hills flourish like they always have.

The tallest component of Camden Hills is Mount Battie. Its peak shoots up 780 feet (238 m) above the ocean.

From Mount Battie’s heights the views of Penobscot Bay and Camden are awe-inspiring. The sight is an undeniable highlight on the New York to Maine road trip.

But how do you get to Mount Battie’s remarkable overlooks? A popular 0.5 miles (0.8 km) long trail takes you from the streets of Camden to its top. However, a paved road also lets you travel up the slopes of Mount Battie by car.

No matter where you stay in Camden, you find a relaxing vibe. But its downtown area is the best pick for lodging if you prefer easy access to eateries and shops.

Acadia National Park is the northernmost and final stop on the New York to Maine road trip itinerary. In New England’s only national park the mountains spectacularly meet the Atlantic Ocean.

Acadia’s loop road is often referred to as one of the most scenic drives in America. When you visit on the NYC to Maine road trip, it’s easy to see why.

The bucket list drive takes you around the eastern half of Mount Desert Island. Highlights include spots such as Sand Beach, Thunder Hole, Otter Point and Jordan Point.

At its end Cadillac Mountain makes up a jaw-dropping vista. From its 1,530 feet (466 m) high top, which makes it the tallest point along the entire Atlantic coastline, you have an undisturbed view of the wild surroundings.

Mount Desert Island’s western portion invites you to an experience off the beaten path. This Acadia part is quieter, and gets fewer visitors, than the island’s eastern half.

But quietness is far from western Mount Desert Island’s only ace in the sleeve. The area is home to scenic spots including Echo Lake and Long Pond.

In addition Bass Harbor Head Lighthouse is positioned at its southernmost point. Built in 1858 it’s a manmade attraction that beautifully complements the awe-inspiring nature in Acadia National Park.

Bar Harbor is to most visitors the best place to stay at Acadia National Park. The gateway town offers easy park access and the amenities you crave for.

You find the answers to some frequently asked questions about the ultimate New York to Maine road trip below.

How long does it take to drive the ultimate New York to Maine road trip?

The one way road trip from New York to Maine and Acadia National Park is 592 mi (953 km) long. Driving it takes roughly 12.5 hours, not including any stops along the way to Acadia.

Where should I stay between New York City and Maine?

Additional New York to Maine destinations along the route include Mystic, Hampton Beach and Freeport.

How many days do I need to take the New York to Maine road trip?

For the ultimate experience it’s recommended to have 10 days or more for the New York to Maine road trip. However, make sure that you add time if you want to fit in one or several longer stays along the way.

Where to stay on Martha’s Vineyard, MA

The 13 best US islands to visit

Where to stay in Newport, RI