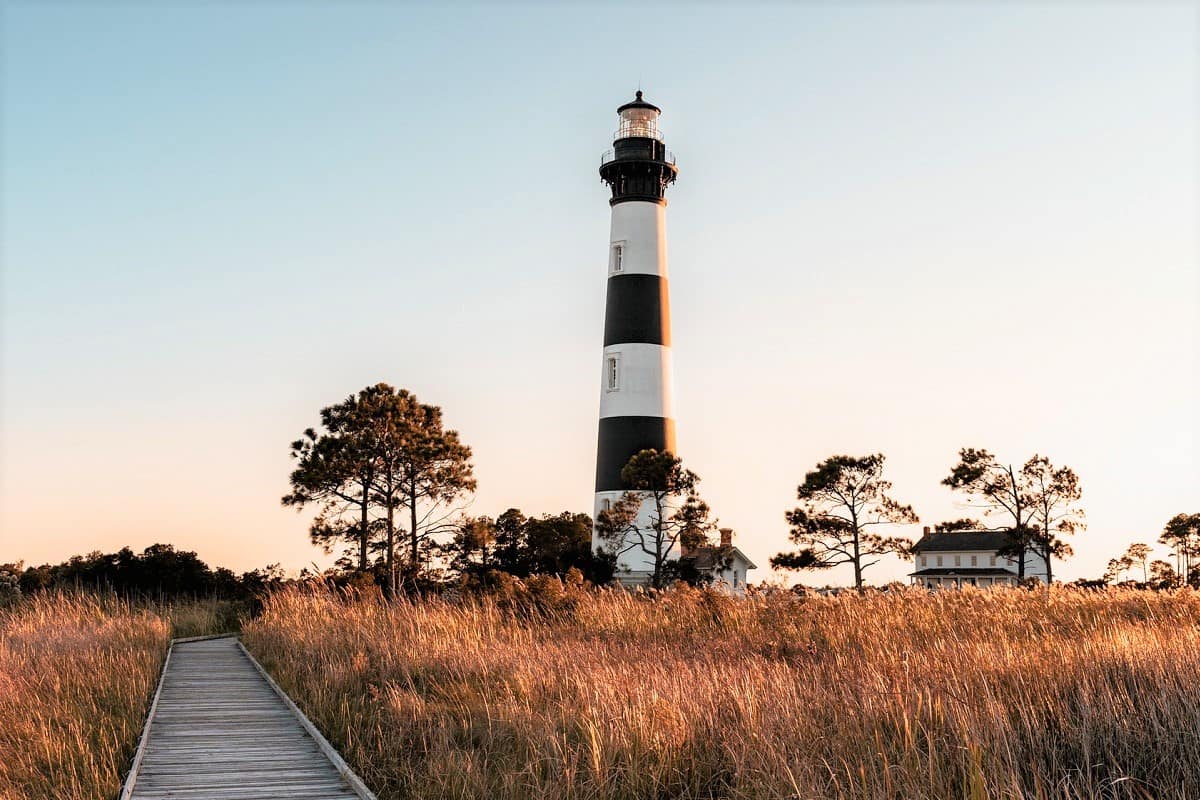 The Outer Banks in North Carolina is a destination of undisturbed beauty. When you vacation in the Outer Banks, also just known as OBX, there’s always a secluded beach close by. Accompanied by historic lighthouses an Outer Banks vacation is the definition of picturesque.

What to expect when visiting the Outer Banks

The Outer Banks trace the Atlantic coastline of the United States. From the Virginia border the string of peninsulas, barrier islands and sandspits stretches southward down the North Carolina coastline.

With 125 miles (201 km) of untouched beaches from the Virginia border down to the tip of Ocracoke Island the Outer Banks is a beach bum’s delight. The abundance of beaches is to many the prime reason to visit the Outer Banks.

The Outer Banks is a vacation paradise with a rare undisturbed beauty. Along the secluded coastline there are several Outer Banks areas and communities to get to know.

The northernmost Outer Banks towns begin right at the Virginia border. Carova and Corolla are remote communities that offer seclusion to an Outer Banks trip.

Further south and closer to the mainland bridges you find the towns Duck and Southern Shores. The name of the former town gives away the area’s past as a popular region for duck hunting.

Kitty Hawk, Kill Devil Hills and Nags Head are the three most central Outer Banks towns. Located at the road connections to the mainland these towns are busier and more developed.

Roanoke Island is a sheltered Outer Banks island that doesn’t face the Atlantic Ocean. West of Bodie Island and Nags Head the island is home to the two communities Manteo and Wanchese.

South of the Northern Beaches you find Hatteras Island. With a length of roughly 50 miles (80 km) the Outer Banks island is one of the longer islands in the contiguous United States.

Ocracoke Island is with its location southwest of Hatteras Island the southernmost among the group of Outer Banks destinations. As there is no bridge to Ocracoke Island, most island visitors get to the remote Outer Banks island by ferry.

The best things to do in the Outer Banks

From the serene beaches to the tall lighthouses an Outer Banks vacation has all you need for a good time. The best things to do in the Outer Banks are not complicated but that doesn’t make them less appreciated.

Above all the things to do in the Outer Banks it’s the beaches that most visitors mainly come for. The long Outer Banks coastline is like made for relaxing beach getaways.

In the central area around Kitty Hawk, Kill Devil Hills and Nags Head you find popular beaches and Outer Banks things to do off the beach. But if you prefer a quiet beach day you’re never far from it on an Outer Banks trip.

As there’s more than 100 miles (161 km) of shoreline to enjoy, you can try a new beach spot every day of your Outer Banks vacation. When you vacation in the Outer Banks the variety of beaches is highly treasured.

As the Outer Banks waters are known as the “Graveyard of the Atlantic”, their role through history can’t be overestimated. The tall Outer Banks attractions have guided the way for generations of seaborne travelers.

Nowadays the impressive lighthouses provide unbeatable views for Outer Banks vacationers to enjoy. Especially at sunset a lighthouse visit is also one of the most romantic things to do in the Outer Banks.

Indulge in the history of flight

The Outer Banks is where the first powered, sustained and controlled airplane flight ever took place. On the historic Outer Banks spot in Kill Devil Hills the Wright Brothers National Memorial commemorates the achievements of the Wright brothers.

Wilbur and Orville Wright, also known as the fathers of flight, picked the Outer Banks to take advantage of its coastal winds, vast sandy areas and peaceful isolation. With perfect conditions and after a lot of experimentation they finally achieved that first famous flight a day of December in 1903.

When you visit the memorial on your Outer Banks vacation it’s fascinating to follow the story of the Wright brothers, from failure to success. On the extensive grounds you also find appreciated markers to visualize the locations and lengths of the first flights.

In Nags Head the playground of nature Jockey’s Ridge State Park is located. The state park encompasses extensive sand dunes including the tallest living dune on the Atlantic coast of the US.

A comfortable 360 feet (110 m) long boardwalk makes it easy to get a good glimpse of the Outer Banks park. At the end of the boardwalk you also find an observation area.

But to take in the full beauty of the surprisingly vast sand dunes it’s a good idea to climb them. When you reach the top of the Outer Banks dunes, it’s spectacular to see not only the huge dunes but also both the ocean side and sound side.

Among all the best things to do in the Outer Banks the highlights for the animal lover are the wild Outer Banks horses. The unlikely animals descended from Spanish mustangs wander freely along the pristine North Carolina shoreline.

For hundreds of years the wild Outer Banks horses have strolled the North Carolina shores. The four-legged Outer Banks attractions were brought to the area by early European explorers in the 1500s.

One theory says that the iconic Outer Banks animals swam ashore from sinking ships. Another explanation is that they for one reason or another were left behind by their owners.

Regardless of exactly how the Outer Banks horses first arrived they are very appreciated North Carolina inhabitants. The wild beach horses certainly add a unique dimension to an Outer Banks vacation.

The Whalehead Club is a historic waterfront property to visit in the Outer Banks. In Historic Corolla Park the Outer Banks attraction is not only an architectural masterpiece but also a museum with an interesting story to tell.

Edward Collings Knight Jr. and his wife Marie Louise built the Whalehead mansion in the 1920s. The rich Rhode Island couple used the house as a winter retreat. Far away from the hustle and bustle they recharged with family and friends in the Outer Banks.

To include the Whalehead Club on your Outer Banks vacation itinerary gives you the chance to learn more about the history behind the mansion. The well preserved mansion appears to have frozen in time and the property is listed on the National Register of Historic Places.

The northernmost Outer Banks lighthouse is located in Corolla not far from the Whalehead Club. First lit in 1875 the Currituck Beach Lighthouse is very recognizable.

Roanoke Marshes Lighthouse is not a jaw-dropping brick lighthouse like the other Outer Banks lighthouses. Instead the structure in Manteo on Roanoke Island has a much more humble appearance.

The different Outer Banks lighthouse is not towering but rather like a coastal cabin with an attached beacon. Although very small the building and its pier is a pleasant spot to visit on an Outer Banks vacation.

At the northern end of Cape Hatteras National Seashore the Bodie Island Lighthouse proudly stands. First lit in 1872 and in black and white the lighthouse is one of the most iconic Outer Banks attractions.

From every angle it’s a joy to take in the views of the magnificent lighthouse. However, make sure that you take the boardwalk to the adjacent marsh. From there the views of the lighthouse and stunning Outer Bank surroundings are even better.

On Hatteras Island the Cape Hatteras Lighthouse is located in the heart of Cape Hatteras National Seashore. First lit in 1870 the current lighthouse replaced an older Outer Banks lighthouse that didn’t prove to be effective enough.

There’s something special about each lighthouse in the Outer Banks, and Ocracoke Lighthouse also has a unique story to tell. The lighthouse on Ocracoke Island truly has history on its side.

The Northern Beaches, Roanoke Island, Hatteras Island and Ocracoke Island are different options for where to stay in the Outer Banks. Each area offers its own charm on an Outer Banks vacation.

If you enjoy liveliness and want to be near most Outer Banks things to do the central Northern Beaches towns Kitty Hawk, Kill Devil Hills and Nags Head are for you. These towns are busier with more developed Outer Banks vacation spots.

But if you rather have a quiet Outer Banks getaway away from it all it’s better to look towards the more remote northern or southern parts of the region. Up in the far north at Corolla or down in the south on Hatteras Island and Ocracoke Island the crowds are thinner and the pace slower.

Here you find the answers to some frequently asked questions about visiting the Outer Banks, North Carolina.

Where is the Outer Banks located?

The Outer Banks trace the eastern coastline of the United States. From southeastern Virginia the ribbon of peninsulas, barrier islands and sandspits extends southward down the North Carolina coastline.

What is Outer Banks NC known for?

Since long the Outer Banks has been known for its secluded beaches. In addition the Outer Banks is also the place where the first powered, sustained and controlled airplane flight ever took place.

How do you get around in the Outer Banks?

With several towns and spread out things to do the best way to get around when you vacation in the Outer Banks is by car. North Carolina Highway 12 runs along the coast and takes you to most Outer Banks places of interest.

Where to stay in Acadia National Park, ME

Where to stay on Nantucket, MA

The best things to do in Blowing Rock, NC

Where to stay near Great Smoky Mountains National Park, TN/NC