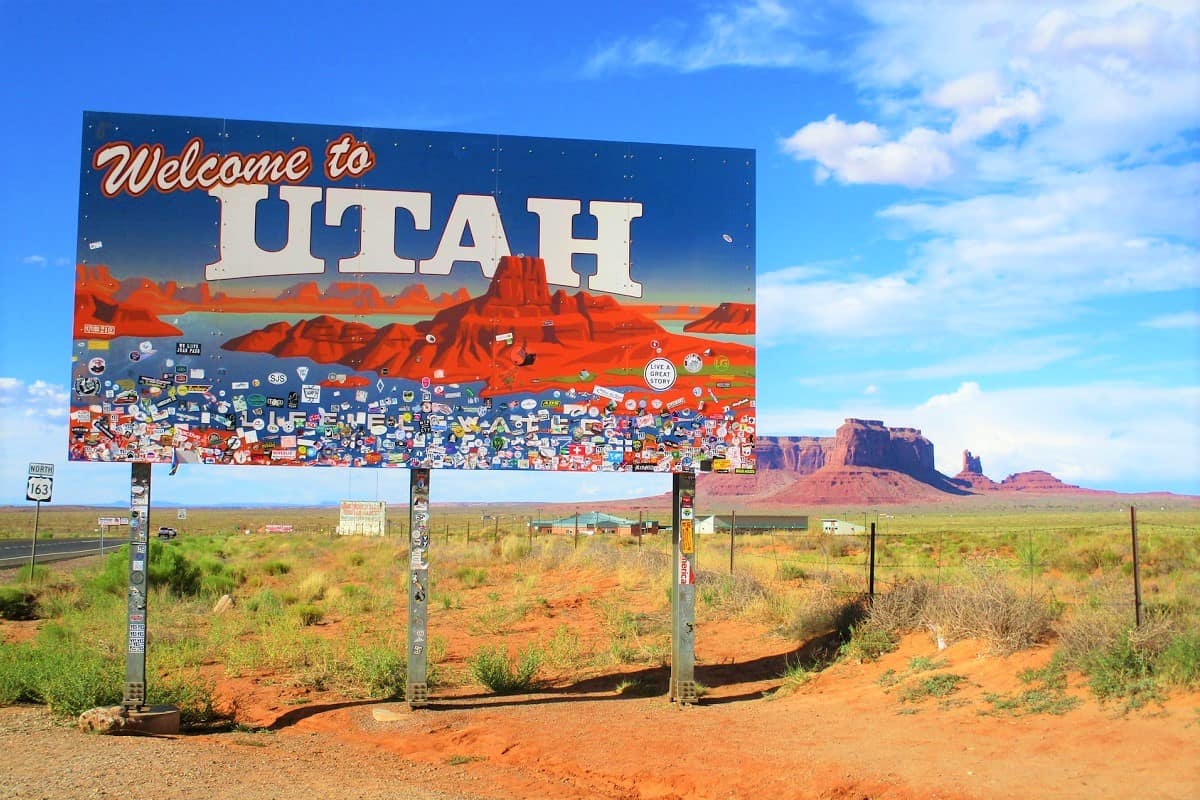 The most beautiful places in Utah include red deserts, green canyons, mysterious rock formations and even interesting history. With so much on offer, Utah truly deserves its reputation as one of the prettiest members in the US. Positioned in the American Southwest, the state offers a jaw-dropping cocktail of must see places to explore.

Zion National Park in South Utah was established as early as 1919. That makes it the oldest park among the five national parks in the state of Utah.

In Zion sandstone cliffs in cream, pink and red beautifully get contrasted by the park’s green canyon floors. The environment is spectacular in Zion, and the Utah park also offers some of America’s best and most famous hikes.

Hiking Angels Landing, Observation Point and the Narrows in Zion are some of the best things to do in Utah. These awe-inspiring hikes, in the state’s first national park, are certainly strong contenders for all Utah bucket lists.

For Monument Valley the state of Utah shares the glory with Arizona. This famous red valley among the most scenic places in Utah is located on the border between Southern Utah and Northern Arizona.

But when you visit Monument Valley, you will likely ask where in the universe you really are. Defined by its red valley floor and giant buttes shooting up towards the sky, Monument Valley Tribal Park is breathtaking.

This is one of the most beautiful places in Utah and the United States. Monument Valley is also where Forrest Gump ended his cross country run in the iconic movie.

If you look for something extra, the hotels in Monument Valley with valley view take a stay to the next level. Waking up to the otherworldly Monument Valley surroundings is a true privilege.

Bryce Canyon National Park is famous for its dense population of rock hoodoos. Even among all the must see places in Utah the hoodoo rich Bryce stands out.

The scenery in Bryce is like nothing else. Bryce’s peculiar red rock hoodoos make Bryce Canyon one of the most unique places to visit in Utah.

Among all the hoodoos in Bryce the most famous one is Thor’s Hammer. It’s THE hoodoo in Bryce Canyon and the one you don’t want to miss.

To reach Thor’s Hammer you just need to take a short hike down from the main road. The easy hike to get to the iconic Utah spot is certainly worth every single step.

Capitol Reef National Park is another great national park in Utah. As it gets much less attention than some other spots among the most beautiful places in Utah, it’s also known as the state’s best-kept secret. But the park is unique in the way that it offers both diverse nature and interesting history.

Fruita Historic District in the park adds a historic dimension to a Capitol Reef visit. Only few buildings remain in Fruita today but when you visit it’s easy to believe that the settlement used to be one of the prettiest towns in Utah. The setting in Capitol Reef is just stunning.

In the Quarry Exhibit Hall visitors can view more than 1,500 dinosaur fossils. That makes the national monument one of the world’s richest dinosaur deposits. The remains on display in the extensive dinosaur graveyard include the species Allosaurus, Apatosaurus, Camarasaurus, Diplodocus and Stegosaurus. Visiting Dinosaur National Monument is one of the best educational things to do in Utah.

6. The vast and remote Canyonlands

Canyonlands National Park is a grand national park in Utah. The more than 335,000 acres are filled with fun Utah things to explore. But as Canyonlands covers such a vast and remote area, most visitors don’t have time to explore more than just a slice of the park.

By far the most popular district in Canyonlands National Park is Island in the Sky. It’s the easiest area to visit, and its paved drive takes you to some of the most scenic places in Utah.

Arches National Park and its timeless red rock landscape is known as one of the most scenic places Utah. The highlight in the park is its more than 2,000 signature arches. And among all the arches in Arches there is in particular one that stands out.

The Delicate Arch is the most famous and photographed arch in the entire park. For a close-up view you need to hike a round trip of 3 miles (4.8 km) from the trailhead. Just be prepared that the trail gets incredibly hot during the warmer months of the year.

It’s called a lake but in truth it’s a colossal man-made water reservoir. But no matter if you choose to call it a lake or a reservoir, Lake Powell is one of the most beautiful places in Utah. Its inviting waters contrasted by the red cliffs is a stunning sight.

Lake Powell on the border between Utah and Arizona is a desert paradise for water activities. Millions of people travel to the Lake Powell area each year to enjoy water activities in the desert. It might be a fake lake, but the fun is certainly real.

Park City is constantly mentioned as one of the prettiest towns in Utah. The mountain town is especially a popular winter destination, and in the area you find many world-class ski resorts.

But you don’t have to ski to enjoy Park City in Utah. The historic buildings, charming vibe and incredible mountain backdrop makes Park City one of the most beautiful places in Utah to spend time in.

Where to stay near Bryce Canyon National Park, UT