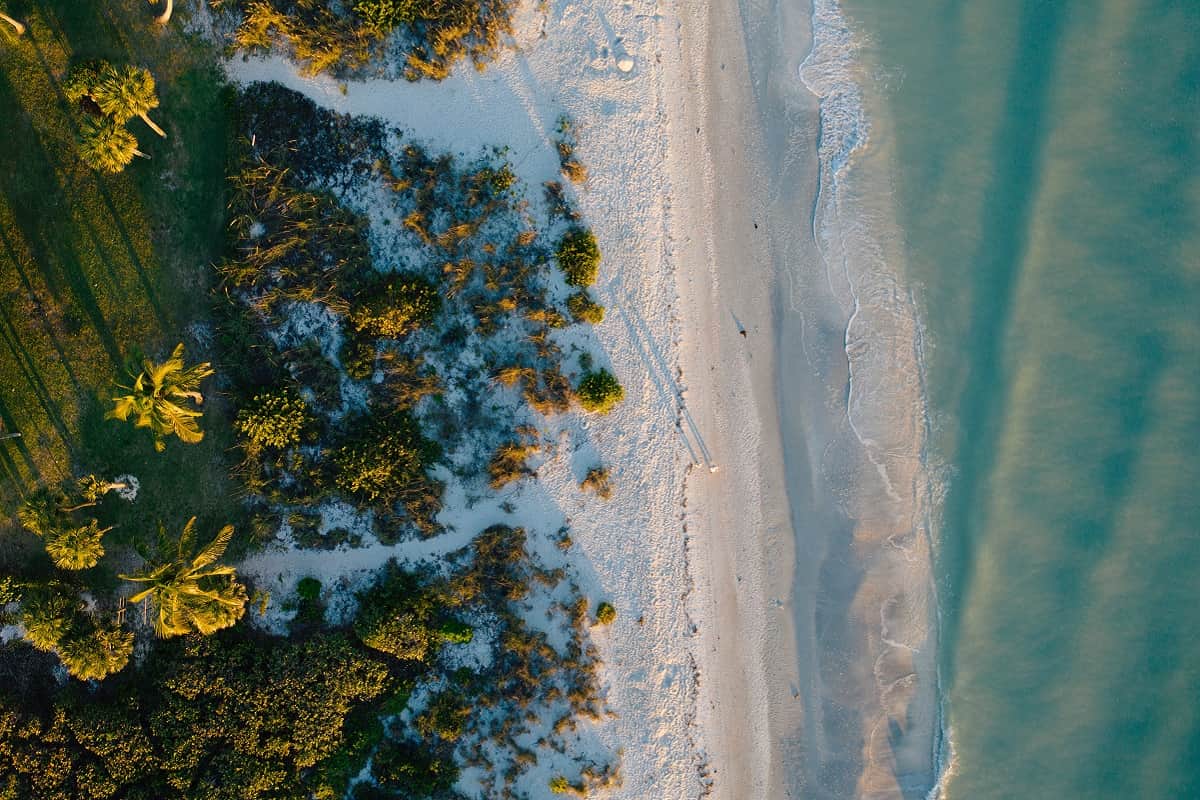 The beautiful Sanibel Island has wonderful beaches, shelling called the best in the world and a special bond to nature. You don’t find any high rises or flashy billboards on Sanibel Island. Instead, the best things to do on Sanibel Island include unwinding and enjoying the amazing nature that you find wherever your eyes go.

It’s maybe no big surprise that biking is a popular way to get around on the island. Certainly, the size of Sanibel Island is very reasonable for going on a bike excursion. But most importantly there are about 25 miles (40 km) of paved bike trails for you to explore.

So hop on the bike and get ready to discover some of the best things to do on Sanibel Island by bike. Soon you find out that some of the best beaches are the beaches that most people don’t find.

For anyone, not just the bird lover or photographer, J.N. “Ding” Darling National Wildlife Refuge on Sanibel is a big experience. More than 200 bird species have been sighted in the refuge, and that’s just the sighted ones. So look for pelicans, spoonbills, cardinals and egrets among others as you take in the beautiful surroundings.

J.N. “Ding” Darling National Wildlife Refuge is one of the best things to do on Sanibel as it represents the old and natural Florida. So it’s a great spot to find the real you and for getting back to nature.

3. Amazing shelling is a must thing to do on Sanibel Island

Sanibel is literally made of shells and shelling is one of the most popular and best things to do on Sanibel Island. Its shores scoop up the beautiful shells of different types from the Gulf of Mexico. So anywhere on the southern coast of Sanibel from west to east is a good place to go for a hunt.

The shelling on the island is world famous and a fun Sanibel thing to do for all ages. If you go shelling on Sanibel during low tide and in the morning you improve your odds to find beautiful shells even more.

For instance, popular beaches for shelling on Sanibel Island are Blind Pass Beach, Bowman’s Beach, Tarpon Bay Road Beach, Gulfside City Park and Lighthouse Beach. Why not make it a thing and try them all to see where you find the most wonderful shells?

4. Head over to the Sanibel Lighthouse

The Lighthouse Beach Park is located on the eastern tip of Sanibel Island. This charming area is one of the top places to visit on Sanibel and it offers a a beautiful beach, some of the best shelling on the island and a fishing pier.

5. Go for a peaceful beach walk

A great and soothing thing to do on your Sanibel vacation is to go for a dreamy beach walk. There are so many picturesque beaches on Sanibel that you even could pick a new beach to walk every day. And you don’t need to take many steps on the sand before you feel more relaxed.

As you walk along the shore it’s only you, the sand and the waves. Exploring the stunning Sanibel beaches by foot is a great way to unwind. You can almost touch the peacefulness when you explore the surroundings on Sanibel Island. The bond to nature is special on Sanibel and that’s certainly very appreciated.

One of the best things to do when visiting Sanibel is to go to the even more remote sister island Captiva. Captiva Island is located north of Sanibel, and doesn’t have a direct connection with the mainland. But the two islands are connected by a bridge where the northern tip of Sanibel meets the southern tip of Captiva.

Captiva Island has many of the same traits as Sanibel with beautiful beaches and tropical Florida nature. But Captiva manages to be even quieter and more laid-back than Sanibel as it’s further away from the mainland. So expect a very relaxed day far from it all when you go to visit Captiva Island.

7. Enjoy a Sanibel sunset from a prime location

That the day is about to turn into night doesn’t mean that the good times end on Sanibel Island. Sanibel’s location on the Gulf Coast of Florida makes the island a great place for stunning sunsets.

The best sunsets on Sanibel are on the western side of the island where you get to see the sun disappear right in front of you. Therefore anywhere on or near Bowman’s Beach is a great sunset location. Enjoying the beautiful Gulf Coast sunsets is one of the best things to do on Sanibel Island.

The best things to do on Sanibel Island FAQ

Here you find the answers to some frequently asked questions about the best things to do on Sanibel Island, Florida.

What is Sanibel Island known for?

Sanibel Island is well-known for the picturesque shelling beaches and adjusting life to nature. And a large portion of the island consists of J.N. “Ding” Darling National Wildlife Refuge, which is home to a wide range of birds and other animals.

What’s the best time of the year to visit Sanibel?

Sanibel Island is a tropical gem that’s popular to visit year-round. However, outdoor acitvities are more comfortable during spring, autumn and winter. So avoid the summer if you want to dodge the hottest temperatures.

How long is the bridge to get to Sanibel?

The Sanibel Causeway that takes you from the mainland to Sanibel is 3 miles (4.8 km) long from end to end. But the mental distance is even further as Sanibel is so different compared to the mainland.

Are there alligators on Sanibel Island?

Most visitors never see alligators on Sanibel Island. However, Sanibel and its more than 2,200 acres of freshwater wetlands are home to a substantial population of alligators. In other words, they are there but mostly prefer to not interfere with humans.

Where to stay in the Fort Myers area >>

The best things to do in Florida >>

7 reasons to visit the Everglades, FL

Where to stay in Clearwater Beach, FL

The best things to do in Key West, FL

Where to see alligators in Florida, FL

Where to stay in Key West, FL